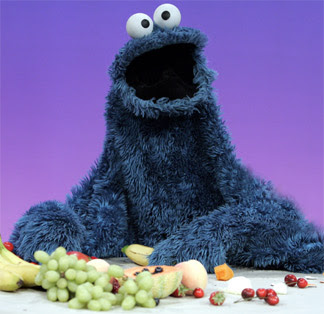 Me love melon, grape, and bah-nan-ah!

Me succumb to media-fueled paranoia about our obese nation and its love for the quick fix and disdain for moderation!
Posted by Mego at 3:47 PM 2 comments:

Oh Telephone Line, Give Me Some Time

I'm playing a wicked game* that occasionally pops up at work. Voicemail War transpires when you call my work phone and you hang up on my voicemail. Then you call again and Caller ID identifies you (and keep in mind often I don't answer the phone, even when I actually can answer it and I'm not in the middle of talking to someone at the door or my hand isn't buried in a box of Cheez-Its. As a general rule, I kick it to VM. I did my time, thankee), and you hang up again. And you call again, maybe even from your cell phone this time, trying to trick me with a different number but leaving me the same tinged-with-anger "cl-clumpk." And thus and so allllll the August afternoon long.

Because only freaks phone a reputable place of professional business repeatedly every ten to twenty minutes, listen to the entire outgoing message, and then hang up without leaving a message on the voicemail.

And why would I want to talk to a freak, freaks?


*not in the surfer-slang sense but rather in Chris Isaak nomenclature
Posted by Mego at 2:46 PM No comments:

Planet Earth Is Blue And There's Nothing I Can Do

Our solar system would have 12 planets instead of nine under a proposed ''Big Bang'' expansion by leading astronomers, changing what billions of schoolchildren are taught.

Scientists have determined that there may be up to three additional planets in our solar system. But then they also can't seem to agree on what a planet actually. That's why over 2,000 astronomers are meeting in Prague to hold brainstorming sessions before they agree and vote on a universal definition of a "planet."

And theTribune explains that

The new definition, which will be up for a vote at the convention in Prague next week, states that a planet would be any star-orbiting object massive enough that its own gravity shapes it into a sphere, more or less.

Are they going to squint at some PowerPoint slides over coffee and Czech pastries? Speaking of coffee, isn't this all sounding a bit like a celestial Folger's commercial? "We've secretly replaced the fine nine-planet Solar System with twelve star-orbiting objects massive enough to shape itself into a sphere!"

So yeah, they are saying that if an "object" in space is round, then it's a planet. Objects that would qualify as new planets are the asteroid Ceres (obviously getting a helluva upgrade); 2003 UB313, the farthest-known object in the solar system that's nicknamed Xena (obviously discovered by a nerd or a lesbian, or both); and Pluto's moon, Charon. But wait a minute, hasn't Pluto's own identity as a planet been in question since--well, since we studied the Solar System in 5th grade and I made that planet Jupiter diorama by painting a styrofoam ball orange (with a spot of black) and hanging it by an unbent paperclip and fishing line inside a Kinney's shoebox painted?

You know what? I'm just going to go on what Jack Horkheimer (thank God you're still alive!) has to say:

''The solar system is a middle-aged star, and like all middle-aged things, its
waistline is expanding."

Never Been A Better Time Than Right Now 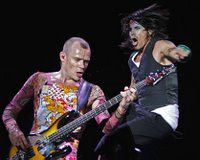 I sat in the dirt.

I drank some cherry-red slushy thing with Southern Comfort in it. 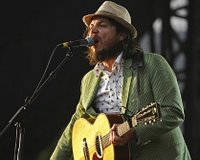 Oh, and they were there, too, playing into the sunset. Gorgeous.
Posted by Mego at 11:17 AM No comments:

I'm A Low Brow But I Rock a Little Know How

Zero chance in hell of getting me to go.

I'll spend the weekend with friends and pop in a few cds that remind me of my first Lolla, 1992, Alpine Valley (where the falafel was six dollars and the wait for a soda was an hour, and the Ministry mosh pit made a crop circle on the lawn).

And I'll remember this especially:

Letting The Days Go By

This video is from 1980, and even against the digital pyrotechnics, hi-def hijinks, and teensy-tinsy fiber-optic filaments of today, it's arresting.

There's minimal camera tricks, which at the time consisted of the squiggly dissolves, rushing close-ups and split-screen cheesiness found in auto dealer and K-Tel commercials, and no crouching tigers, stomping supermodels, pretend espionage, "concert" sequences, or, actually, any musical instruments at all--not surprising from the Downtown-est of the big Downtown NYC groups that were finally lining their pockets with dead presidents in the 80s.

Just the knife-sharp surprise, needling anxiety, and thrumming regret of a life not-lived channeled only through Byrne's beany body bending and herky-jerking, making the busiest ode to idleness--one of my favorite songs, duh--that much better.
Posted by Mego at 3:43 PM No comments:

It's The Eye Of The Wiener, It's The Thrill Of The Fight 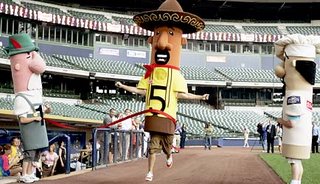 The Milwaukee Brewers unveiled (unwrapped?) the newest competitor in its beloved Sausage Race, the Chorizo.

Fans were able to meet the meat Saturday night, when he came in a disappointing third place, behind Bratwurst and Italian Sausage. But because the new wiener (yes, I said it) has not yet been fully approved for the home game contest, El Picante (yes, that's his name) has been sent down to the minor leagues for