A love like ours is love that's hard to find

A ballad that resonates today because, well, because.

There's a time in life when you form a relationship with a dining establishment, and the sudden demise of that relationship can be unexpectedly devastating.

I know it's food--but it's more.  Friends, family, loves--memories. The biggest part of me.

Email ThisBlogThis!Share to TwitterShare to FacebookShare to Pinterest
Labels: 1976, Chicago, Love, The Biggest Part of Me

Turntable: Though the world's full of problems they couldn't touch us even if they tried 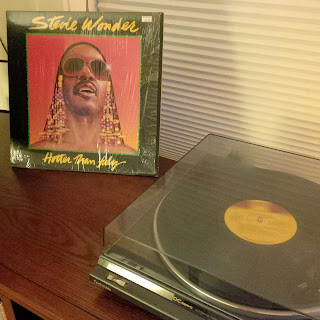 Summer at the Pool: an' I can't blame all on the sun

I ran past the neighborhood pool the other morning, and that unnaturally blue water took me back to those lazy days of sizzling sidewalks and French fries and involuntary gulps of chlorinated water and that moment when you get to the pool early in the day and it's still crisp and clean-feeling. All day spent at the pool, with a Realistic boombox playing the radio end-to-end. You'd float along to whatever was being broadcast, and when it was crowded, only chopped bits of hits would penetrate the cries and splashing, like the gut-rumbling synth chords in this one:

Of course, at the time, gurgling and gasping from 3 feet to 15, we had no idea the song commemorated a riot.
Posted by Mego at 4:12 PM No comments:

Email ThisBlogThis!Share to TwitterShare to FacebookShare to Pinterest
Labels: 1983, Eddy Grant, Summer at the Pool

To the place in our hearts where we hide

They're really saying, "I love you."

Don't you know that you can count me out

I'm back and I still have Beatles on the brain.

While on a vacation, I read this new book detailing the drek, the droll and the decadent of early 80s Brit (mostly) New Wave. While it was "highly entertaining" as promised, I wish it had dispensed with the sometimes-cutesy personal intros that chirp or moan about the writers' personal connection to and memories about each group profiled. I wouldn't want to read that kind of thing even if I had written it.

Anyway, I have New Wave Brits and Beatles on the brain now; to wit:

Oh, I had this whole record (and still do) and I'm listening to it now digitally, realizing that it's not as terrible as I remember it to be

Wait. I didn't own this record, I had the follow-up (and still do). And it is terrible.

However, they did somewhat redeem themselves at Live Aid's Philadelphia stage in a performance that preceded said terrible album's release, with some high-powered back-up:

I was nodding my head at the end there. But it's still pretty electric-drum-filled terrible.

I guess I have a new album to add to my vinyl hunt list. Oh yes, because this one that I don't have, Into the Gap, sounds like the distant places that New Wave began to conjure for teens in American suburbia, whether it's the coast of Antigua, slick Berlin streets, or the inside of David Bowie's closet. It sounds like the safari look of '83 (found here, a boatnecked treasure trove!), back when Banana Republic was a J. Peterman-style catalog operation.

Until I find it in the bin, I will enjoy Into the Gap digitally, and cleanse myself of the cover that followed it in 1985 (ugh, pearls, satin, giant shirts, ugh) with a different cover: