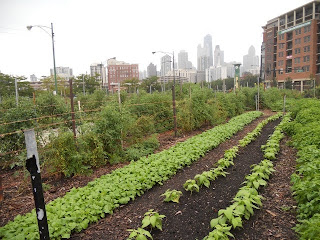 Last Saturday morning I volunteered at Chicago City Farm. The opportunity surfaced via One Brick, which is a sort of clearinghouse for volunteer opportunities in Chicago. Delcared as "volunteering made easy," One Brick is ideally suited to folks busy or not sure where to share your time/talents with others. (Learn and do at http://www.chicago.onebrick.org/).

City Farm is an initiative of a Chicago urban reuse program known as the Resource Center (http://www.resourcecenterchicago.org/), located in what's probably the ultimate crucible of gentrification, along Clybourn at Division, where the easternmost block of the Cabrini Green public housing development meets the westernmost block of Gold Coast retail comforts (Starbucks, Dominicks). The last remaining once-ivory-colored Cabrini tower overlooks the garden; from its grilled windows, I imagine it is also possible to watch shoppers stroll into Starbucks for half-skim lattes and shaken iced passion teas and doggedly push carts teetering with groceries out of Dominicks. And I'd like to think that City Garden must look like a rare geode from up there, green shape encircled in a crust of dun-colored stone.

The sustainable vegetable farm produces thirty kinds of tomatoes alone. The bounty is sold to local chefs and at the Logan Square Farmers Market on Saturdays. There's also a brisk walk-up business on weekends, and there's even a honey-rich beehive. Explaining that the lot used to be a gas station, the lead farmer described how the vegetables, fruit, and herbs are all grown in composted soil that's essentially the decomposed leavings from the same fancy restaurants that do business with the farm. Dinner remains and kitchen scraps are collected by the Resource Center; the compost is trucked in from a sister location of the Resource Center. Everything operates on a cycle at the City Farm.

There's a kind of edible weed that we were told to not to pull called purslane. The small-leafed succulent plant has a, well, succulent look and is indeed succulent. I tasted a few leaves during the morning; purslane has quite a tang and a curious but not annoying gummy quality. Found the world over, the plant isn't actually a pesty or invasive organism. It's used in traditional Chinese medicine for infections and sores, and no less than ancient Roman philosopher Pliny the Elder revered it as a talisman, advising followers to wear it in amulet form to ward off evil. Thoreau wrote about dining off of it in his primitive cabin by Walden Pond. In fact, it's a companion plant, a beneficial weed. In my limited gardening-out-of-planters experience, I've basically pawed out anything that I didn't seed or plant in my garden, not knowing that beneficial weeds act many roles: repelling pests by masking the non-weed plants' scent with their own, or using that scent to attract needed insects; burrowing rootways for other plants to follow; directly plugging nutrients into the soil and providing extra moisture. With its thick spreading leaves, purslane creates low cover over the soil, engineering a "humid microclimate" for vegetation growing by its side. The City Farm farmer didn't explain all of this, since we had to get down to actually avoiding the purslane and pulling out the not-companion weeds. I'm glad I followed my usual Wiki-ddiction and looked it up, since I have been pulling purslane out of my own garden for years. Now I am going to top some salads with it. And even in a week, I think that leaving it in the sidewalk planters has given the flowers a late-summer boost.Or I perhaps I have just imagined that. Regardless, I like the idea that what's sprouting in my yard is the same stuff that's growing in Gdansk, Greece, and Gainesville.

Our work at City Farm cycled us around the lot, like a backward-moving clock. First, I and four others weeded a narrow row of chard which ran along the fenced edge of the land and overlooked an alley. SUVs splashed through the potholed passageway next to us as we picked and pulled. Then we were moved to rows of tomatoes on the southern half of the farm. By that time my hamstrings and quads were aching from squatting, so I sat myself down in the mulch and enjoyed the meditative repetition of pull-pile-throw, pull-pile-throw, and nibbled on purslane now and then. At one point I spied one of the other volunteers, a lanky dude who had biked there, probably (and yes, I am stereotyping) from someplace like Logan Square, chowing on handfuls of purslane. I imagined him rolling out of bed after a late night someplace west of Western, hopping on the bike, breakfastless and slightly dehydrated, for this opportunity-- something I might have done myself only a couple of years ago. This morning, however, I had had an English muffin and coffee at home, and brought a banana in my bag with my gardening gloves. Times have changed.

Next we were moved to carrots, and that involved more careful purging since the fringey tops of those plants were lush and delicate. By then, the sun was out and the work became more laborious and sweaty, but I was working more efficiently because I had identified the two major interlopers in the vegetable beds. The first I called grass because it was the same stalky stuff that would pop out of the lawn when I was a kid, the stuff that we'd put in our teeth and pretend to be hillbillies chewing stereotypically on a stem. The other was something else we prized as children playing in the yard, clover. At least it looked like the tiny plants from which I'd pluck white flowers and fashion long necklaces, spending quarters of hours--a lifetime at nine, ten--carefully knotting stem to stem.

Two men and a little girl came to examine and buy vegetables from the lead farmer. The sun moved into noon. The carrot weeding continued until the One Brick event leader called out to us. We need to pick a hundred beets for the next day's Logan Square farmers market, she told us. Does anyone want to help? I was ready to move on to a less mundane task by then -- procuring, not removing. Some of us scrambled over to the beet plot, where sixty or so had already been gathered. Make sure they're big, like this, we were told, "this" being the size of a large peach. I only unearthed apricot-sized beets, and so I didn't ultimately contribute to the harvest. But it felt good to seek and and gently ease something out of the ground rather than repetitively scan and yank.

We were led to another, more tangled tomato plot next. There weren't many ripe tomatoes there, but smooth green baubles were visible in among the riotous vines, and verdant rows of green leaves with magenta spines edged the tomato rows: radishes. Our farmer had explained that City Farm practices interplanting, where two different crops are grown together to maximize space and productivity. I realized that I have probably seen this happen on a larger scale on road trips through Wisconsin farmland and through Virginia and Kentucky, and Indiana -- maybe even around the 5 in California between LA and San Francisco. Barley, corn, and soybeans, squash, pumpkins, I've read, all can be interplanted. Here, we had to be careful not to pull radishes from their cozy soil nests. The tops grew together even more thickly than the carrots had over in their plot, and the weeds here grew in a confounding interweaving with the radish plants -- shoots, tendrils, stems and leaves of the heroic little protagonists sometimes indistinguishible from the invaders. Just as I approached a particularly Byzantine patch of good versus evil, we were called to gather by the farm's tent, where we could rest and sip water from an Igloo cooler. Our shift was over.

Though I felt some typical Type-A disappointment at leaving a task unfinished, I was ready for a cool drink and some lunch that was more than a few tart nibbles of purslane. It would have synchronous and, yes, symbolic to dine on what came from the ground in which I was just tugging and squirming. But I can't afford the money and time for a table at Frontera or the Ritz-Carlton dining room or any of the other restaurants that are supplied by City Farm , so I joined the One Brick group for some mediocre bar food on Wells Street. I had a salad that probably came from a bag.

Later that day, I weeded my own yard garden and planted a few fall mums to replace some summer perennials that had fried in the near-constant July heat. I nibbled on the tiny sheafs of purslane growing in the moss rose planter, and thought about my work that morning, its irreducible and earthy necessity, and the residents of that Cabrini tower watching the sunflowers near the western edge of City Farm sway in a breeze at dusk, and Logan Square couples and Bucktown moms, relaxed after brunch and coffeeshop visits, musing over one hundred beets at the City Farm stall at the Farmers Market, and how life goes into the ground, life comes from the ground, and goes back in, and out, over and over. And I thought about the triple-planted tomatoes and radishes and purslane, growing harmonionously in their neat muddy rows, helping each other to survive.
Posted by Mego at 1:25 PM No comments: