Hanging on to hope.

I've posted about this song before, but some five years ago, it was about a moment, not the song. Shuffle got me that December night, and the moon. 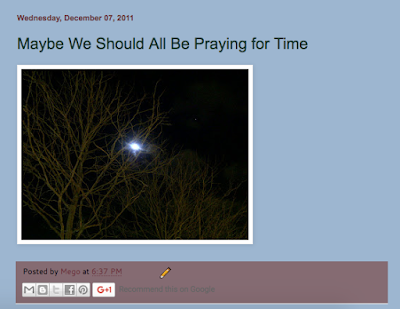 I guess those are two things that are and have been constant over the last five years: music being moving, and the moon, too.

They probably will continue to be, as the new year begins. George's music will be. When you think about it, he had every reason in the world to continue to write merry pop songs about love and longing after 1985-87. He was pretty, the songs were pretty. But there was something deeper going on under that face and physique, something that the later leather-jacketed, all-model videos and exploding jukeboxes couldn't cover up. A thoughtful, timeless soul who got well down into the thorns of relationships and love and sought to remind us of having faith in yourself.

I'd put this song on par with any 70s Lennon ills-of-the-earth shouter.

I wouldn't have listened to it the last few days of this exceptional year, had he not passed. But he did, and here I am, and here it is.

I'll keep looking for the moon in the trees, and hoping.

And it's hard to love, there's so much to hate
Hanging on to hope
When there is no hope to speak of
And the wounded skies above say it's much too late
Well maybe we should all be praying for time

So goodbye, but please don't take my heart

You are twenty, and a romantic.

Then you hear this song.

Email ThisBlogThis!Share to TwitterShare to FacebookShare to Pinterest
Labels: Can't Add RIP Because I Can't, George Michael, Love, Too Many Rips