Today's Shuffle: How to Kick That Gong to Life

On Repeat: They Use the Head and Not the Fist

It kinda does remind me of the Monkees, actually.

All roads lead to Beatown*, where Andy breaks down how one actually achieves (or, in the late 70s, achieved) what I call that psychedelic, in-the-tunnel sound effect at the end. It's literally playing two tapes of tracks synced slightly apart from each other and recording on a third tape. I think.

*This is very, very dangerous for me. I haven't let myself even scan everything. Yet. When that day comes that I've gotten everything work/project/necessity-shopping finished, then I will dive into this fat pile of creative analysis and music/gear nerdery.
Posted by Mego at 5:36 PM No comments:

Your Guilty Pleasure: Say What You Want to Say

This was inevitable; I've had a crush on this sassy thing since the moment I first heard it. And I wonder if something else is inevitable, too. Since bright, jazzy pop songs from Britain that I liked two decades ago seem destined for Smooth Jazz radio, does that mean I am destined to be driving a new-used hybrid in, say, a decade (maybe entirely electric; god, let's hope so for our blighted Earth's sake), and listening to satellite radio--or the satellite radio chip implanted in my head, okay, maybe not that yet, maybe I am merely wirelessly connected to my "cloud" and my "cloud" contains a preponderance of what became in the last decade of the last century known as "Smooth Jazz?" Will I be ferrying who/whatever around X city listening to a personal mix of Seal and Sade and Swing Out Sister and Lisa Stansfield (and don't worry, that's gonna be an eventual YGP as well)?

I hope at least I am centered and making more money while I'm beating the steering wheel in time with "Time and Tide."

This anxiety is actually about aging and not coolness. Or, rather, it's about coolness to the point that you become less cool as you age, but because you are aging you don't give a shit that you are less cool than you used to be, you give a shit about other things more endemic to aging. Like what kind of car you drive. Or aching.

So aging, for that reason, can't be all that bad.

Neither is this song. The Roots certainly thought so, and that's cooler than cool since Questo is my current favorite tastemaker. Until, that is, I am old enough to completely stop giving a shit about others' taste.
Posted by Mego at 12:38 PM No comments:

We don't have the time for psychological romance

Oh man, this is so that time. SO that time. Huge, boxy snare drums and clavichordy keys. But that bass is the anchor for your booty and the reminder that, before their mid-80s peak, Cameo was a funkstravaganza in the mold of Parliament-Funkadelic and most definitely the Ohio Players.

I'm mostly tickled by Cameo because it reminds me of my friends' wedding reception, which was one of those that featured separate entrances into the Italian restaurant banquet hall (yes, this was Milwaukee, how did you guess) by the male and female halves of the wedding party. The guys trotted in to "Word Up." It was 1995, so in our ironic distance from high school and all things not involving two shitheads on guitars in flannel, we were all OH NO YOU DIDN'T. Except no one said OH NO YOU DIDN'T in '95, I think.

I realize this was five guys in a studio with a bunch of machines, but I like it.

Plus, without Yes' seminal comeback (oxymoron?) album 90125, the world never would have experienced The Art of Noise, which was comprised of most of 90125's producing team. That group, after the Yes album was on shelves and rising to mega-hit, was noodling around with leftover beats and blips from 90125, feeding them to a Fairlight CMI synthesizer to make something new--not unlike taking the party crudite tray and throwing it in the blender or stockpot for soup.  The Fairlight was hot shit at the time; let me just list what resulted from it for evidence: "Shock the Monkey," the theme from Miami Vice, Kate Bush's album Never for Ever, and entire compositions by famed French noodler Jean Michel Jarre, including 1981's Magnetic Fields (and so there you have that--but wait--actually, not really because they're named after a French book, not Jarre's album. Sigh. I guess the French like their champs when they are magnetique).

Anyway, armed with the Fairlight (two keyboards and a tv screen, in my definition), its sampler, and a couple of additional noodlers, the 90125 team became The Art of Noise, and, by 1983, was releasing some influential output. 90125's primary producer Trevor Horn had already experienced recognition out from behind the console as a member of The Buggles. Yep, him.
,
Though better known later for the wistful, soundscapey "Moments in Love" (now a Smooth Jazz staple, but that's another story) TAON's "Beat Box," released in 1983, is an aural potage of vocal snips, beats, and blares that contains sounds that launched a thousand hip-hop tracks. Or a few dozen, according to this Whosampled site that is going to become the next big time-waster for me after I'm done with Procatinator.

One here at 1:43--a kind of orchestral blast--ended up in a Kurt Blow track almost immediately. You'll recognize it from, yeah, a thousand other tracks. Because what is any kind of music besides noodling and new use of old ingredients?

And that little BLAP! BLAP-BLAP! is how you get from prog rock to Marky Mark, kids. Through synthesizers.

Now We Don't Talk Much at All

He Who Hesitates Is Lost

...only because I've had this song in my head for a week solid because there are gulls crying everywhere around this eerily hot city, and they're sailing everywhere, not just over the lake that's the right temperature for this time of year. I've heard them outside my bedroom window since last Wednesday morning.

They're all going, WHA-AT? WHA-AT? WE'RE OUT HERE AND THERE AREN'T ANY DAMN FISH OR PEOPLE EATING CHEETOS ON THEIR YACHTS FOR US TO HAVE A DECENTLY FULL BELLY, MAYBE WE SHOULD GO BACK TO WHERE EVER IT IS WE HANG OUT FROM DECEMBER TO MARCH (USUALLY). BUT IT'S NOT COLD SO I DON'T KNOW WHA-AT THE HELL I AM DOING. WHA-AT?

Also, I love that, as Andy Partridge describes, the song's peculiar keyboard progression originated on a Mellotron he dragged up some stairs at home and noodled out some three-finger chords he thought sounded "like the seaside."

Or like the lake when freaked-out gulls are circling over it and happy, just slightly freaked-out people are wending around it on dusty bikes and last year's shoes.
Posted by Mego at 1:14 PM No comments:

It's Just That I Need Something Solid in Mine

Email ThisBlogThis!Share to TwitterShare to FacebookShare to Pinterest
Labels: The Jam, Wah-wah

I Can Run without Fear

This song was the closing theme of the radio broadcast of the Benny Goodman orchestra from the Congress Hotel in Chicago in the mid-30s.

I'd like to think my grandmother enjoyed listening to these when she was a girl.

In a World Full of Kids, Egos and Ids

Just because I can't bring myself to work after vacation...

For a minute there. 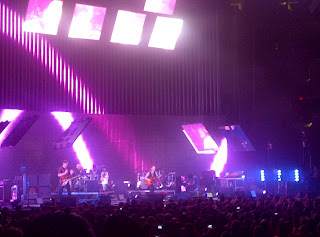