Hope for a Badman

But at least the seeds of love will be sown...

Your Guilty Pleasure: Full stock of thoughts and dreams that scatter

You CANnot deny this groove.

It's from this album, the predecessor to the monster Private Eyes. I dig this track and the album's other hit, because they're really in the same family as the early croony, funky blockbusters, and they precede the movement (descent?) into total synth and mechanized drumland, aka the mid-80s.

When the sun settles down and it takes a lovely form

I discovered this song back when I would bike to the lakefront with my now practically prehistoric mp3 player/radio combo on Sunday afternoons and would sit there and out at that sky/sea line and listen to Herb Kent The Cool Gent all afternoon, until the sun wasn't burning overhead anymore and the water turned into that unreal mercury color.

But it made me think of the end of the day someplace else, on my beloved Anna Maria Island, where we'd carry our gear (chairs, umbrella) and munitions (beer) to the beach after the burning peak of the day, at about 3, and live there--I mean live--until after sunset.

Each of those sunsets is still etched in my heart somewhere, after almost exactly a decade ago and two additional midsummer visits. The day trip a couple of years ago as March dawned was especially special because we brought new visitors with us.

There was a time that this song salved some wounds for me, on those long and solitary Sunday afternoons, and offered the inkling of the constancy of peace in one's heart. It places me there, in the heart, and at AMI with the people and place that I love, and reminds that the part of the day spent in that kind of peace, company and place, is what matters most.

Today's Shuffle: Everybody wants to look the other way

Periodically, this blog is about how I (still) like Sting when I shouldn't.

My return to Shuffle coughed up my favorite track from The Soul Cages, the tour of which I actually saw almost exactly twenty-two years ago. I managed to miss most of Don Henley, who opened (hah, post-punk rules!) that night at Alpine Valley. My roommates bought me a ticket for my birthday earlier in the summer and then set me up to travel to East Troy with some of their friends.

I haven't forgotten that show, mostly because someone had a reserved ticket stub and each person in the group (who the hell they were, I have no idea now) used it to travel into the rarefied air of the Reserved Covered Area. I made to row 8 and was able to get an up-close with a forty year-old and still incredibly hot Sting and his big ol' Doc Martens.

Now, of course, I look at the footage of it from my desk (and imagine not being able to comprehend that 22 years ago--I mean, did I know an Internet existed in 1991?) and see that Sting, as usual, positioned some incredible musicians from across genres to deploy his cross-genre music, his music that, in the immortal words of Branford Marsalis, "is a motherf*cker."

I just found this, and, despite afternoon dyspepsia, I've become happy as a pig lolling in jazz-rock poo:

By the way, is Branford wearing the first iteration of a WHO DAT t-shirt, or what?
Posted by Mego at 4:28 PM No comments: 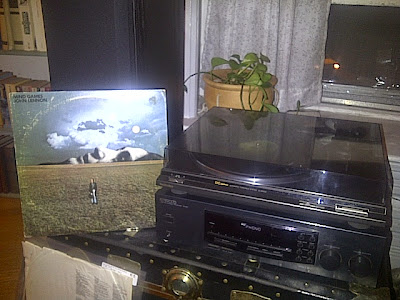 Now you've got me hopped up on that

I'll cast aside the problematic (and really, really obvious) metaphor, and the voice mechanization, and the crap quality of this clip, and and just roll around in the falsetto and the louche grandness of this song I can't get out of my head. JT's left town, and even though I didn't go, I've been waking up with this in mind every day since.

The silver moon and the evening time

The greatest cover artist of the 70s? Yes. A favorite from way, way back. Yes.

Oh, the sublimity of the E and Em, how she wrings it out!

You, soft and only 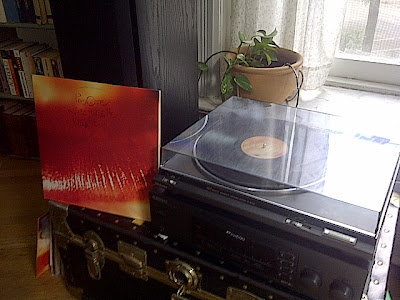 Another new old beloved for my new machine.
Posted by Mego at 1:55 PM No comments:

Email ThisBlogThis!Share to TwitterShare to FacebookShare to Pinterest
Labels: My Favorites, The Cure, Turntables

A lesson to be learned.

Written, in response to a challenge, before having to go to the airport--a last-minute task wholly and unabashedly unrelated to a gotta-be-someplace deadline.

Just like I'd do. No wonder I've always liked this gentle sliver of a song.

Woke up and thought "This ain't exactly heaven"

This is a commemorative recommitment post. I will post. I will, I will! It's summer, after all, and if I have to sit at this screened box all day weekdays, when I am not gazing out of the window at the beckoning brightness, I should be rooting around in here.

I don't know why, but I woke up today determined to listen to The Specials. Being part of a super-nichey movement back when niches didn't really exist (at least not the way they do now) didn't preclude their political stance, one that's genuine despite the jump-up-and-down-at-the-party sound.

Ska just sounds like fun unlimited to me, at least.

So that's probably why I want to hear some, as midsummer peaks and more fun is on the horizon (or should be).