So Why Not Take A Look Now?

"The most difficult thing is the decision to act, the rest is merely tenacity. The fears are paper tigers. You can do anything you decide to do. You can act to change and control your life; and the procedure, the process is its own reward."

I've Got Believers Believing Me

The story behind my current Internet radio addiction, KCDX.

I like the thought of a lone radio tower transmitting an uninterrupted stream of comforting classic-rock gems from the middle of a desert. No commercials. No hype. No attitude. No humans. Just Rock & Roll.
Posted by Mego at 11:51 PM No comments: 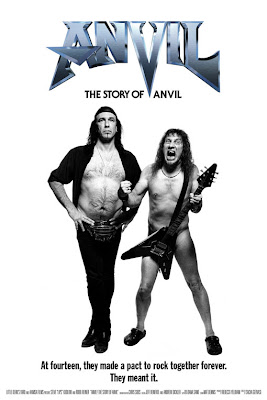 After watching the surprisingly gut-stirring documentary Anvil! The Story of Anvil the other night, I've had creativity on my mind. Specifically, what one expects from a creative life. How do you live it? How do you bridle your creative impulses? How do you explode your sense of security? How do you bind the stable proton that's a workaday/watch-TV life with the free-wheeling neutron that's going, wheeeee, I'm gonna make stuff, I'm gonna be a star!

Lips (nee Steve Kudlow) is a sunny-tempered Toronto native and, some would say, heavy metal trailblazer as lead singer of Anvil. In the film, we watch Lips and his childhood friend and bandmate, stoic drummer Robb Reiner, struggle with this nucleus of creative self. At the same time they chase the heavy metal carrot, touring and recording their thirteenth album, This Is Thirteen, they are beaten by the stick of life. Lips and Robb have families, mortgages, jobs -- and an unshakeable commitment to make art, to rock and f**king roll til they can't no more.

And that begs the question, then, what is success? Anvil was on a fast-track to fame but poor management and subpar recordings (they released over a dozen albums since the early 1980s) stretched to a trail of business ineptitude, scrabbling promotion, and dreary day jobs. Nevertheless, Lips and co. -- Lips especially-- kept the fire of their imaginations stoked, even though they play genre of rock that's seen its heyday go, even in the face of a comically-inept tour of Spinal Tap proportions that's documented in the movie. Despite being considered too old to realize their rock and roll fantasy.

Anvil's dream is no fantasy, and no ironic experiment or gimmicky fourth act that was spat from a reality tv producer's cynical gullet. It's the real deal -- the same thing I thought when I came across this week's Internet-to-talk-show-couch sensation.

Twelve year-old (this is almost thirteen) Greyson Michael Chance expertly and dashingly raises the roof playing and singing a (yep) Lady Gaga song at a sixth-grade talent festival. First, somebody award a Bronze Star for bravery to this kid for performing a potentially swishy and punch-inducing number in front of a middle school assembly.


Moreover, Greyson -- by decades on the other side of success late-night crises of faith and unforgettable carousals in hotel rooms from Anvil -- has got it in his soul.

I'll let Lips explain what "it" is:

"I love to entertain – it’s in my soul. You’re in the same room as the people who love you. The foundation of this business comes down to the fans – the people that love you. Without those people you really are nowhere.

Reality is that we are not getting any younger. Time doesn’t move backwards – it moves forward. You run out of time. You’ve got to do it now.

Everything changes to something else.

Most important things – relationships. Where you have been. Experiences you have had.


...So sayeth the dude who used to play his flying-V with a female pleasure apparatus. Which isn't any more silly and savvy and profound than pounding out a stripped-down and de-popped pop ballad on a Steinway, oblivious to the breathless astonishment of tween girls.
Posted by Mego at 4:09 PM 1 comment:

Toys, Toys, Toys In The Attic 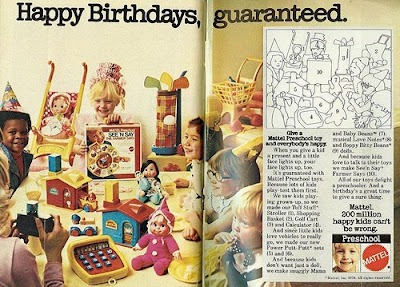 I totally had that See 'N Say. And maybe the baby doll stroller.

Now is when I should probably say a little something about birthdays, right, it being a month out from my own day that is my day.

A guaranteed happy birthday used to mean getting exactly what you asked for -- the See 'N Say, the baby doll stroller and the new baby doll. And maybe there were a few surprises (the shopping cart, too!?) thrown in.

A guaranteed happy birthday now? Hmmm. It means waking up feeling alright. Soft sunshine. Smiles from people you care about, and giving them back. Looking at the shimmering rush-hour traffic snaking up and down the city, but feeling languid inside, knowing you belong where you are, or that you are getting (inching, speeding, coasting, whatever) to where you belong.

Getting exactly what you asked for.
Posted by Mego at 3:17 PM No comments:

Why is the start of a new day, that essential salve for the painful itch of bad days and being human, described with more or less violent imagery?

I sought out the etymology of the phrase ("look up," y'all--see yesterday's post), but first was blammo-ed in the face with some breaking hype--I mean, news (that is as relevant as the price of tea in China. Or guns in Texas).

I couldn't find anything really definitive, even in the Oxford Dictionary, and that was the OED database accessible only through a University login. "Daybreak" first appeared around 1530, as in some old dude writing " At daye breake, au jour creuer." So, did the French come up with it? Why does day "break." I've seen a few sunups and there's no crack, no forceful burst or acute expulsion of the our closest star.

Today, when this unhappy event and this other desperate act happened (on the heels of these earlier two events), I vaguely grasped how the start of a new day does not bring comfort or refreshment to some. For some, dawns do not break but rupture, not marking the start of forward action but the beginning of the end.

I'm a week behind. But when aren't I? So, it's quite fine that I start a daily-blogging-for-a-month project six days late. I'm grateful that this nudge (they call it an "epicenter") even exists. It is time to exercise these muscles, and, much as one might dedicate oneself to build stronger triceps and traps, muscles that make the words go need to be strength-trained as well. Resistance and isometrics, in repeated (daily) reps, to...make the words go. Development of good form instead of recruiting of exterior muscle groups (thesaurus and Wikipedia), and controlling the weight of ideas, instead of allowing them to be huffed out in a workout flurry.

This month's theme at NaBloPoMo (which looks like stuff from the periodic table of elements to me) is "Look up."

I did several times today, mostly from the computer screen at a wall, or a person, or at nothing at all. On the way downtown, I looked up to the sky. Then I composed a sort-of haiku in my head. I chanted the words the rest of the bike ride so I wouldn't forget, and confirmed length (since I spent many months re-writing Moliere's Alexandrines, I instinctively go for twelve, not seventeen syllables) and wrote it once I got to a computer.

I saw three white objects in the azure sky: a jet, a bird, the moon.

And now here's some Freddy Fender -- who, as an American-born Tejano superstar, might also speak out about things going on in Arizona these days, if he was around (R.I.P.).

No more of these. Thanks, NaBloPoMo!