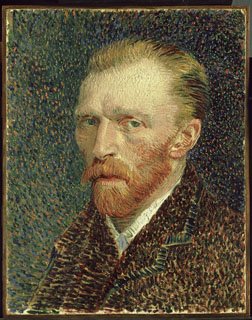 I just heard this song.

While I do have a particularly pungent loathing for "American Pie" not only due to its exhausting length but some bad experiences with it involving microwave popcorn, a college dorm lobby, and twenty over-hormoned high school drama students, I truly heard the lyrics to this song just now, and--damn. It's gorgeous.

Maybe because I just saw Vincent yesterday at the Art Institute...
Posted by Mego at 3:54 PM No comments:

We Walk Away, Maybe Then Shake Hands

I have a secret.

I love "But Anyway" by the Blues Traveler, despite the cloying harmonica and patchouli reek. It's got such a great groove. Whoever is their drummer is a pretty good drummer. And I heard them play it for the 7 minutes I watched them at Lollapalooza in August.

Good God, Allmusic tells me this song is from 1990!

Cripey. I was placing it at an entirely different time, say 96 or 97, round about the time the Bob Dylan's hot son was singing in the Top Ten in his leather jacket.

What's clear is that this decade has entered its second half, and I need to get into the first. Maybe I should start with, say, OK GO. That will get me up to at least 2002...
Posted by Mego at 3:56 PM No comments:

Life In A Northern Town 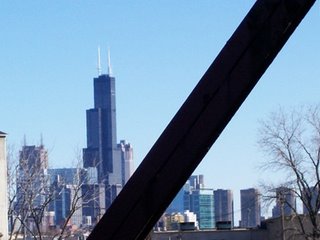 He Is Your Marrow/And Your Ride Home

I saw you again tonight, this time at the Damen station. I ran into a friend and as she and I walked down the east-side stairs, you came down the west. We were on the same train.

Tonight you wore a sporty Timberland-type coat and a backpack. But I knew it was you when I saw those eyes--and that tuft of hair that juts from the right side of your head.

I didn't see your cassette player and headphones; tonight, were you just listening to your thoughts?
Posted by Mego at 10:48 PM No comments:

An Open Letter to the Emo Boy with the Sweet Brown Eyes on the Blue Line, Thursday, October 5, 7:30pm

First of all, let me say that I like your tilted haircut.

You were reading a small paperback, folded over, like a Sixties or Seventies Penguin or Avon edition of something classic. It was slim enough to be Siddartha, but too small for Atlas Shrugged or Foucault's Pendulum. And I don't think Emo boys read Bukowski, that was really favored by the post-punk malcontent boys of my own era.

Because the thing is, Emo Boy, while I was struck by your ragged but clean boyishness, I recognized there's a Lake Michigan of age that laps our shores. I mean, the small paperback volume I have at home that resembles yours is The Awakening, which I would not have understood whatsoever when I was 22 and listening to Matthew Sweet's "I Thought I Knew You" when I wanted to really work up some sentimental anguish over something or someone, just like you probably listen to Joan of Arc sometimes and stare stonily out the train window instead of reading your novelette.

Would you mind that I like to sing along with circa 1988-90 George Michael?

But seriously, I think your book looked interesting, whatever it was (from Myopic?), and so handy since you could hold the door rail and read as we lumbered under Milwaukee Avenue.

After we both exited the train at Damen, I noticed the Walkman cassette player clipped to your studded belt. You listen to tapes! What were you listening to? It couldn't have been too sad because you seemed--without even knowing you--cheerful...? I don't want to scare you off or anything, but Emo Boy, I have so many tapes. I even purged like three-quarters of them, and they still fill a filebox to its brim. Maybe we could listen to tapes together sometime? I know, I know, there's probably very little in that box that interests you, maybe the New Order Power, Corruption and Lies tape that was a used copy even when I found it. Or The Dream of the Blue Turtles might just make you chuckle since I bought it the year you were born. Then again, if you are listening to tapes on a cassette Walkman, you must be listening to older stuff, because I don't really know if Jets To Brazil releases tapes, do they? I haven't bought a new album on tape since 2000, when you could still get them at that short-lived Coconuts on Damen. And, okay, I admit it: Kylie Minogue's Fever was the tape I bought there, maybe because it was less shameful the less money I spent on it--but have you ever heard that song? La-la-la, la-la, lala-la, la-la-la, la-la, lala-la, Can't Get You Out of My Head? It's fierce.

Anyway, maybe we listen to some tapes, I still have a stereo with cassette player...we can meet in the middle with some Bowie? Some "Moonage Daydream?"

You know, Emo Boy, when I was your age had our own Emo, and it was called Weezer. Well, they are still called Weezer, but I think they were/are Emo. What do you think? I mean, I think when I sang (and sing) along with "Say It Ain't So," it feels like what Emo should feel like, despondent but...literate, angry--but a rage mild enough to throw only a sentimentally-saved bouquet of dead flowers in the garbage.

Which is what I think I saw in your huge bear-brown eyes: intelligence, with a capacity for woe. Like in The Great Gatsby, how Nick can see Myrtle Wilson's "tremendous vitality" in her dead, gaping mouth when she's dead in the Valley of Ashes.

Maybe you can explain it to me over chai lattes at Earwax? Hopefully they will play the Police box set while we're there, and it'll mist with cold, grey rain outside.

Until then, I'm yours, wistfully,
Posted by Mego at 5:33 PM No comments:

This afternoon, the sky over the lake looked like the Simpsons title sequence, little white clouds stippling the blue arc, all the way to Michigan.

I need to start carrying my camera around again. Once I empty the memory card of the 15 shots I took of seagulls in Virginia Beach. 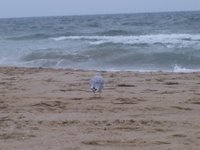 George (whose real name is Georgios Kyriacos Panayiotou, actually. Now there's some Greek Cypriot for ya), was found in the middle of Sunday night alone in his car, having enjoyed that peaceful, easy feeling so much he fell asleep at the wheel. I mean, yeah, sometimes pot makes a person sleep, but come on, honey. I wish he'd straighten up a bit, keep toking and swilling in the club or the manse. I've always liked him: Straight George, Gay George, Fluffy-Haired George, Choose Life T-Shirt George, Tight Blue Jeans, Guitar-Wearing But Not Playing George, even Getting-Felt-Up- In-a-Beverly-Hills-Public-
Toilet George.

This man, this man has a voice like cold mountain air--so good and clear it hurts. I mean, even the high note on "Wake Me Up (Before You Go-Go), when he cries, "I wanna hit that hiiiiigggggggh"--oo, baby, that's some good stuff, and I don't care who you want to grope in the dark and what you have in the felt-lined glove compartment of your Merc. "Freedom 90?" I pretty much collapse into paroxysms of joy when I hear that song. Here's a singer who in his tender twenties made the Daryl Hall's blue-eyed soul sound shit-brown.

Strip away the cheesy synth strings from "A Different Corner," and the accompanying mid-80s video with its all-white, my-baby-left-me-laying-on-this-chaise drama that David Brent aped in his own video in The Office--godalmighty, that voice. I'll let you YouTube that one yourself, because you need to hear this track from the Faith album, one that was somewhat overshadowed by the "I Want Your Sex" controversy (it was bleeped on pop radio in Kentucky to play as "I want your woo-woo") and the supermodels pouting and prancing in his videos.

Forget the gregarious jook-joint sidemen and the lazy old electric fan and the guitar he never plays, and listen to his mountainous frigging range:

No, no, seriously, George--why can't you set your monkey free??

Alright, I'll shut up now and go sing along to "Freedom 90" and shimmy around the computer again.
Posted by Mego at 11:55 PM No comments: