How do you make things new, every day, when days mimic each other, and especially when heading into the perpetually gray or low-light days?

Routines and not-routines. Finding the novel and embedding it in the regular, by seeing. And listening. And doing that again.

At the very least it's (like) discovering something (new) on the radio.


Pink Floyd - Wish You Were Here by larsen42

It's getting to be what I like to call Pink Floyd weather. It has to be something about all the fading light that--you know what?--makes each day different. Huh.

Perhaps I should kick off the season with something new.
Posted by Mego at 12:16 PM No comments:

You must be feeling what I'm feeling, too

Praise to satellite radio, which has been turning up some gems, particularly from the Studio 54 Radio and The Groove channels. There are definitely humans behind the programming, or at least I'd like to think so. Oh, no, they're not content with throwing some EWF and "Bad Mama Jama" and Thelma Houston with you. These cats dig deep. For instance:

Who are Brother To Brother? The Interwebs coughs up barely anything; they plied their trade mainly on dancefloors, and in the funky year of our flares 1976, they released an album (their second) that fit into but didn't spring out of the landscape. That year alone gave us this, and this, and, all bow down now, this.

BTB now reside with the other out-of-print  undead, lovingly preserved in (some) record store bins. And in drips and drops on Youtube. Mildly appreciated and now forgotten by all except the crate diggers and the platter spinners and those who research and celebrate.
Posted by Mego at 3:49 PM No comments:

It's a new season, and time for a new feature. Just like old-school network teevee blithely rolling out comedy pilots chock-full of the forced laughter of tourist audiences--well, this won't be like that.

It's time to exploit my comfortable classic-rock radio listening, the Mr. Rodgers sweater I snuggle into as I work the work-job or continue to unpack the Matterhorn of boxes in my new home. I found a new station last month that has a diversity and homogeneity, all at once, that makes this task a breeze. It's Ireland-based, though most of the bumpers are, inexplicably, voiced in fake American accents. But you sense the source is over there since the station name is pronounced "ZEH-nith Classic Rock."

I'll pick something the radio plays, and treat it well.

This track struck me at first today because I thought it was Carole King's "Jazzman." Then I heard that familiar 70s-radio brogue. "Year of the Cat" and "Time Passages" are two of drop-everything, turn-up-the-radio favorites, so it's no wonder I like this less familiar Al Stewart mellow journey, with its "How Long (Has This Been Going On)" bass line. Then there is the story of a man's sweet, persistent convincing of his love to his love.

Al spins a good yarn, subtly and gently; but in his younger years, when he basically knew or worked with everybody (Yoko to Andy Summers to Jimmy Page) who was anybody, his storytelling was less proportioned. To wit: the 18-minute title track from his second (1969) album, aptly named Love Chronicles, that details his first falling-in-loves and intimate escapades, replete with assignations in English gardens and bemoaning of "the bridge of impotence."

I think this track, though, is more my speed, for its radio length, even though it has the same happy-to-be-oversharing spirit--and is filtered through the cool composure of Alan Parsons.

Today it's been a decade since Elliott Smith died. As I said at the time (or Stephanie did), you really have to want to go to go that way.

His fans are legion, and loyal. I came to the party (probably poor word choice there) late, absorbing every syllable and note of XO during my first year in Chicago. And later. And even later.

Is it the best break-up album ever? I say it's the best post- and post-post, and starting-to-feel-stronger-every-day-post- and wow-what-a-distant-memory-but-this-reminds-me-I-did-it post-breakup album.

I know the album is the death knell of...something, the dreaded major-label debut, but if anything, Elliott's Big Sellout gives him more tools to be even better. The production is not too much, and I think I have a pretty decent over-production bullsheet sensor.

Every track takes a mask off of betrayal and renewal. I'll ponder that more, after a visit to the online store.

It was hard to decide, but this one has always meant the most:

My answer is always the same

I was treated to the subtle and powerful songs of Bill Callahan Monday night. Flanked by winged bulls and the other decadent props of an overpriced Middle Eastern restaurant, he laid out this mesmerizing number.

Today I found out it's a cover of a soulful and decidedly and uncharacteristically (for the time) blues ballad from 1950 by Percy Mayfield, who is no relation to Curtis but was known for this exquisite song and for "Hit The Road Jack," which he provided to Ray Charles. After that, he sank into obscurity.

It's been covered by scads of other ballad crooners, from Sade to the Dead. I think these two, what is perhaps the most recent version bookended with the original, suit me fine.
Posted by Mego at 3:22 PM No comments:

No more standing beside the walls

I enjoyed last Wednesday's show very much, but, holy hell, if these guys had unfurled this cover over all the white, college-English-major folk in that arena--well, I'd have made this post a week earlier.

This is one of my favorite songs, not to mention a top-two get-ass-on-dancefloor-NOW winner. Gaye's reluctant disco effort is lovingly detailed for posterity, and even if the party outside the song's perimeter was manufactured, hell, it was a good one. Plus--banging on bottles.

Of course, Gaye's easy-sound but fastidiously-made groove spawned some controversy some 36 years later, though I think nothing came of it (at least prior to Thicke's, erm, aided VMA rendition), and rightly so. I don't think a "groove" is an exclusive artistic form, and neither does this guy.

Maybe it's number one get-ass for me, come to think of it. I remember sprinting from the front door of the Artful Dodger to the postage-stamp dancefloor in back in record-crushing speed, and then letting this wash over me, surrounded by friends.

So if I have to experience this in a red box onscreen in order to relive that memory in my brain box, and to re-love this song, so be it.
Posted by Mego at 3:21 PM No comments:

...and you know that for sure 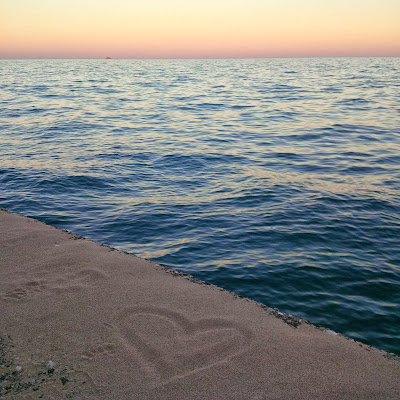 Today's Shuffle: Til the evening is complete

A new commute means new sky and new trees to take in, and a revival of Shuffling off to work each weekday. I have a longer walk to and from transit, but, overall, a trip that isn't disjointed, like the previous decade has been, and is pleasant, even relaxed, at least so far.

Of course, don't let all of this tranquil repose indicate that this post is being posted on the day the Shuffling occurred--but within the week is fine when you're still pulling cookware and curtains out of boxes.

Here's how the first, almost-full week of a new journey began*:


*most appropriately: with Macca
Posted by Mego at 6:07 PM No comments: