If You Want It, You Got It

You Probably Think This Song Is About You

Finally! Here you go -- the Question of the Ages, answered!

But only if you listen to the entirety of my new album*.

*sorry, no extra answers are available if you purchase Carly Simon Heirloom Box edition.
Posted by Mego at 12:22 PM No comments:

Oh What A World We Live In 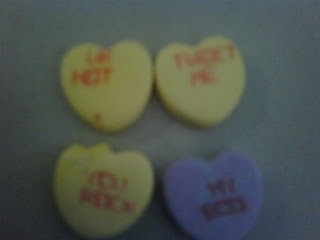 Not only have these reliable but gross-tasting treats been brought crashingly into the SMS Text Era, your major American candy heart manufacturer (though the photo can't quite capture it) has started using some sort of computer program to inscribe the edible messages in an LED-kinda font.

So they look like they are lifted right off the screen of your Sidekick. Or, ur Sidkck.
Posted by Mego at 11:18 PM No comments: 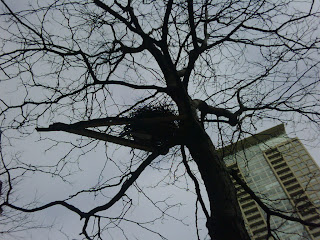 Though the sky was gray this morning, I happened to look up at a street-side tree near my office on Chicago Avenue at the right time. Someone nailed a couple of two-bys to each other, and to an upper branch to, apparently, cradle a nest, a fairly large one composed not just of twigs and raffia, but larger stuff -- we're talking sticks, branch-size stuff. This was a substantial homestead. In a neighborhood of smart highrise buildings thrusting plush condominiums up into the sky, this rustic penthouse suite fit right in.

I like to think that some tenderhearted (and weatherproofed) soul spied the nest teetering on the edge of disaster, and took steps to save it. There's been a lot of construction in the area, so perhaps a bit of scaffolding biffed the tree and dislodged the nest, or, I don't know, some crane action put the avian residence in peril. Whatever the cause, a Good Samaritan grabbed some leftover lumber (or perhaps made a Home Depot run) and a ladder and constructed a ballast so that whatever is living or will be living inside this nest will survive the winter.

While I'd be keen to get hold of a ladder myself and climb up to see what, if anything, is resting inside it, instead I'll be looking up when I walk toward work, in case one day, once spring gently envelops the city, a beak or a wing or a whole entire tiny bird might emerge from this delicate domicile.

I do hope this adventurer will be alright and that this tale will have a happy ending. But I also couldn't help but immediately think of this song while reading that a climber fell 1,500 feet into the crater of the Mount St. Helens.

And You Shall Dwell in the Maze of the Mule Forever, Starchild

I didn't actually recall having seen the 1979 Disney space epic The Black Hole --and I definitely did, and it definitely was in the theatre, not later on incessant replays on a nascent HBO-- until hearing this unidentifiable P-Funk song the other day.

Only the Starchild Clinton and his alien et al could connect rump-bumping funk with terra incognita, the incalculable void, with -- Ernest Borgnine?? Sure, a black hole could be a, um, "vacant booty."

The movie itself doesn't merely jump on the Star Wars bandwagon (looking at you, original Battlestar Galactica). The first Disney film to garner a non-G-rating treads on more existential ground, depicting the space crew eventually and blindly descending into the eponymous black hole (that's no spoiler; c'mon) and possibly into heaven (or hell, or both); reading the synopsis brings Lost to mind, actually, with its push-pull between faith and fate, humans' superior will and the supernatural. I remember it being strangely quiet and weird for a space-age movie aimed at kids over nine like myself.

And while The Black Hole had the voice of Slim Pickens, it's P-Funk's presence that makes me go, What in the wide, wide world-a sports is-a goin' on here?

Look At The Moonless Night And Tell Me

I'll admit it: there's something right about walking in an evening snow shower and hearing that Dan Fogelberg song* no one knows you downloaded.

Don't Let The Sun Go Down On Me 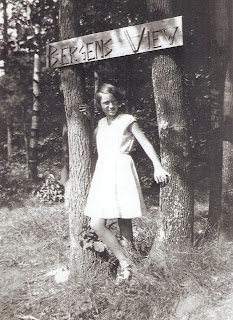