On Repeat: kissed the girls and made them high

You can have your "Rosanna" and "Africa," I want pudding pie.(I'll take any pie, thank you, right now)

So you got Steely Dan without the cynicism and angularity (angular banjos?). You got echoes (fore-echoes) of Tears For Fears big, bright sound coupled with a soulful female voice. You got groove. Hells bells, within the same year as this single came out, a cover recorded by Charme, an R&B group that I can't find a single particle of wiki on, and sung by Luther "Panties-Off" Vandross (as in, "Luther on, panties off.").

You don't get more groove than that -- unless you also write a hit pop/disco/R&B track that scored high in a year that also gave us "I Will Survive," "Le Freak" and "Hot Stuff" (and, okay, "YMCA").

See? You never know what you'll find inside of a pie.

Bring back all of those happy days.

If anyone could sell an aerobics workout disguised as hot, new moves straight out of Danceteria, it's you, babe.

"Holiday" wins, and not just because the aerobics-sans-highcut-leotard video is performed in front of a live Dutch Masters painting.

It's really one of her best songs, one of the few from that debut that she didn't write herself. Plus, that piano riff at the end -- is this the last non-synth instrument played on a Madonna track until "Don't Tell Me?"

I love remembering first hearing this song, thinking she was another Shannon or the like, and realizing, no--now, this is someone completely different than anyone else at the time. She's not British, she's not black. She's (going to be) timeless. And the song, too. To wit:

I should heed my doctor's warning 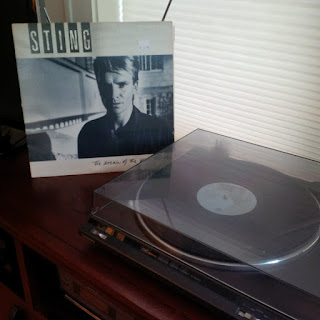 When it's all mixed up

An album--a group (or solo act, depending on the album)--I've returned and responded to for decades and will continue to. Balm for everything. I'll be asking for this in my dotage, to be sure.

But why, oh why, when they tour, is it sporadic and not here?

Still, I have these beloved albums that never grow old to me, and feet to hit the pavement as I listen to them, and a brain to process it all, so who needs a live "bringing-back-the-retro-hits" show?

Email ThisBlogThis!Share to TwitterShare to FacebookShare to Pinterest
Labels: 1993, Horsing Around, Tears for Fears

You've got something about you that I want around me

I'm a sucker for the soaring and otherworldly sounds of Gary Wright. This track is the logical advancement of what he established in "Dream Weaver" and "My Love Is Alive"-- you can hear that the equipment is more state-of-the-art than the tracks of 1975's The Dream Weaver.

Buddy of and collaborator with George Harrison, playing keys on Harrison's solo albums and pursuing a deep interest in India and spirituality with him. No surprise that relationship evolved into logging miles in Ringo's All-Starr Band.

Once in training to be a doctor, Gary assembles songs with the same kind of delicate precision that you find in a surgeon. He found his way around the early Korgs and Rolands, and even pioneered use of the keytar (see below).

And he could still get down.

Gary Wright is resoundingly under-praised, in my book.

As usual, I prefer the deep-cut, non-hit, that first reintroduction of which prompts the delightful realization, "I probably haven't heard this since it was on the radio in 198x!"

Yesterday's Shuffle: Well, you can have all you ask for, though it's not what you want

Heard during commute, whilst attempting to reconcile the resuming weekday requirements with slight, pink clouds of impulses and ocean dreams in the sky.

Just for one day

I think. Actually, I remember all of this:

It's funny, though. That means almost nothing to me now.

And Bowie is...everything. Sharp, on target, on message, unifying, electrifying. And I didn't realize that until I saw it (again?) within the mesmerizing final room of the MCA show.

Also of note within these two: the Union of the Huge High-Low Backup Singer Shirts.

But this... sheer raise-funds, festival-busting perfection. Set the standard, really. And prepped me for dorm-room poster-level worship just a few years later, shifting from multiple, be-makeuped mullets to just...one love.

And before my friends find out I'll be on the road

I don't care if it's not Friday. It's time to send my feet to the ocean.